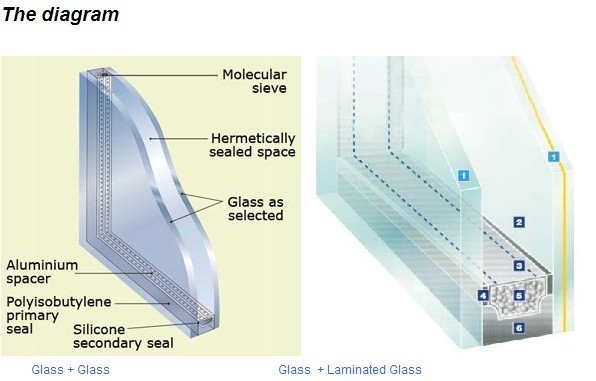 Plan for the Future with Sound and Heat Isolating Glass Units

Glass prices in Thailand have reduced gradually over the last years to an affordable level where every customer should seriously consider to think about Double Glass Windows, also called Insulate Glass Units (IGU). The advantage over single glass is that IGU can be fitted with 2-3 Glass Panels and can reduce the incoming sound levels around 25-38db. The spacing of 10-15mm between the panels can be filled with Argon Gas, which has a lower density than Air. The effect is less physical heat transmission from one panel to the other one, subsequently less heat radiating into your room. The outer panel of the IGU can feature a Low-E Coating to reduce incoming sunlight and UV-Radiation that can greatly affect the Life-Span of your Furniture.

With Top Notch IGU Laminate Low-E Argon Gas Solution you can shave of yearly around 30-40% of your Air-con Electricity Cost. Lets look at the Electricity Consumption in the Thai Kingdom.[hr]

This study by the Ministry of Energy Thailand, shows the Energy Consumption from 1997 to forecast 2017.

Another one by the U.S Energy Information Administration shows similar stats.

Thailand is largely importing energy from neighboring Asean countries, which makes it subject to volatile pricing as demand increases. For the every-day user this translates sooner than later into higher electricity cost.

Prime Asia can measure your Sound and Heat Levels on your Property, and recommend the proper glass for your new house or renovation.

Posted on May 1, 2018 in energy efficiency, glass information

© 2018 Prime Asia Associate CO.LTD as owner of http://prime-asia.co.th, trademark holder of the Prime Asia Logo and the Aerokon Brand and Logo. Unauthorized use and/or duplication of this material, content or pictures without express and written permission from this blog’s author and/or owner is strictly prohibited. Excerpts and links may be used, provided that full and clear credit is given to Prime Asia Associate Co.LTD with appropriate and specific direction to the original content. PA is an expert fabricator of upvc and aluminium windows and doors, electrical doors, thermo insulating glass units, sound proof windows, electrical doors, curtainwalling, wpc decking/flooring, alu louvers, alu composite cladding, sliding doors and security related openings like burglary and bullet proof windows/doors.